You are here: Home › Uncategorized › The Circle of Poverty Spins Faster 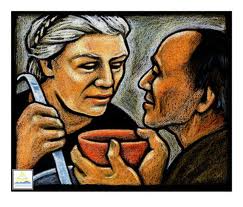 Back in the mid 1980s, when I was a newly single mother of four, I went back to work with a nearly blank resume. I took one low-paying job, then somehow landed a better one, as assistant to the young president of a wholesale company.

It enabled me to cover the rent and necessary expenses in a time when a decent administrative or secretarial job did. For that I was thankful and proud to survive without assistance. It seemed like a dream job, but it lasted less than a year, from December to December to be precise.
I was salaried, as was everyone else except the truck drivers and the guys in the warehouse, who were union and well-paid by the hour. The approximately twenty women who worked in customer service taking orders and placating irate customers were also salaried and not well-paid.
Christmas was nearly upon us. My boss was off skiing with his family. But he called daily with instructions, one of which was that inventory was to begin early, the weekend before Christmas. He ordered that the customer service women were to help in the warehouse on both Saturday and Sunday. I asked him what I could tell them they would be paid for the extra hours. He said “nothing. It’s part of their jobs.”

We ended the conversation and I checked to see what sort of premium the men in the warehouse would be receiving, which turned out to be double for Saturday and triple for Sunday–a big chunk of change. The women were upset because of the unpaid burden being placed on them, but even more because they had planned to use those last few days to shop for their kids and cook for the holiday.

I was pissed. I called the boss and told him that his directive was totally unfair and why. He hung up on me. A few minutes later I was called into the general manager’s office and ordered to clear out my desk and leave. I phoned home, and when my son answered, I said, “Guess what.”

Things have changed. For the worse. A single person earning a low wage cannot support him or herself, let alone a couple of kids. You’d never know it based on government statistics that now quote income averages based on family income, not worker income, as was once the case. If a family earns $40,000 a year because both parents are working at minimum wage in one or more jobs each and their teen has a paper route, that does not accurately reflect the state of the American worker.

As I write this, Walmart has announced that it will no longer provide health insurance to employees who work fewer than thirty hours, joining Target, Home Depot, Walgreens and Trader Joe’s in cutting hours and offering more part-time work in order to avoid the January 15 mandate.
Look for additional companies to cut hours to fewer than thirty. Workers will be forced to depend more and more on subsidized health insurance, and since they will be earning less, they will also be signing up for the SNAP program (food stamps) and fuel assistance, or they will take on another job that offers fewer than thirty hours. The cycle of poverty spins faster.

All these part-time jobs will also benefit the numbers of the BLS (Bureau of Labor Statistics). As this sick drama unfolds, they will be able to announce greater numbers of new jobs and increases in employment. This is because employers are asked how many jobs they have created, and households are asked if they have a job. Do the conclusions based on these statistics reflect reality? Hardly. The numbers don’t even line up. Not counted at all are people who have just given up applying for traditional jobs, as well as all those who are serving in the military and people who are incarcerated.

In the latter case, if those jailed on minor charges, primarily low-income minorities, were included in the total workforce, the real employment numbers would not be nearly as rosy. The government does all it can to aid the “haves” and hide the facts of life about the “have nots.” Actually hide the people themselves. If they didn’t, the plight of the American worker might actually have to be addressed, and that would never do.

As they merge and move, those who ride the economic wave will grow richer, paying more and more to influence politicians and regulators who are in positions of power, and less and less toward the survival of the powerless. The costs of government subsidized programs that keep the working class only functional enough to pick up a broom or hand out bologna samples at the superstore will ultimately be deducted from their measly paychecks. The rich and powerful will continue to screw the poor AND make them pay for it.

As they merge and move, those who ride the economic wave will grow richer, paying more and more to influence politicians and regulators who are in positions of power, and less and less toward the survival of the powerless.